Standing Desk vs Kneeling Chair (Which is Better?)

If you’ve decided you need to do something to make your workdays more active, you could find yourself confronted with some difficult choices. The revolution in active working has presented us with a plethora of different ways to keep ourselves pain-free and active during the workday.

Today we’re going to get into the specifics and present the pluses and minuses of the standing desk vs kneeling chair. So many people swear by either one of these, so who are we to trust? Is it possible that one is better than the other, is it more a case of personal preference and choice? Or will a kneeling chair be better for some and a standing desk better for others? And can you even combine a kneeling chair with an electric standing desk to really drive home the benefits? Read on and we’ll unpick all of the differences between these modern office solutions.

Are Standing Desks Better For You?

Is Sitting Bad For You?

It is common to hear sitting described as the new smoking, and although this might seem a little dramatic, the health implications of our increasingly sedentary lifestyles really are that serious.

Many of us spend 40 plus hours a week in our office chair, a figure which is only increasing now many more of us work from home. As a result, over the past few decades the world has seen a huge increase in obesity, heart disease, and diabetes. Sedentary living is also associated with increased blood pressure, high cholesterol and an increased risk of stroke.

Building exercise into your routine is of course crucial, but even if you do manage to get the recommended 150 minutes a week, the fact you’re sedentary in between is still damaging and limits the impact of the exercise you do.

The only effective way of offsetting these negative effects is, quite simply, to not spend your whole day sitting down. The best way of understanding the health benefits of standing desks is to think of the damage you’re preventing by keeping active. Are Standing Desks Good For You?

Vs sitting for long periods, using a stand desk has some huge health benefits. Spending all day in an office chair can have big drawbacks, but spending part of the day standing keeps your body active and relieves the pressure on the joints.

Using a standing desk can speed the metabolism, increase blood circulation, and lower the risk of heart disease and stroke. Sitting tends to lock in poor posture, whereas standing forces the body to support your body weight for part of the day, strengthening the core and promoting good posture.

Standing for part of the day can also help to speed the metabolism, which increases the body’s ability to burn energy and more importantly, fat. Obesity has reached endemic proportions in the western world, and one of the key accelerators is our tendency to be sat still for most of the day (and night).

Standing desks don’t only mean you stand for part of the day, they encourage a healthier and more active work style, and users generally find they are much more likely to move around when standing vs sitting.

Combine that with fact that standing can burn up to twice as many calories as sitting, and you can see why people become quite attached to their standing desks.

Does Standing Relieve Strain On Your Muscles and Joints?

Sitting in a fixed position all day is unnatural – our bodies evolved to be active and moving, and for thousands of years that’s what we did. It’s only very recently in human history that we began sitting for 7-8 hours a day for work – supplemented by perhaps another few hours in front of the screen at home.

So, it’s perhaps not surprising that this can cause back, neck, muscle and joint problems. Using a standing desk allows you to vary your position during the day, which means you are varying the muscles you use and allowing your joints to move freely.

The ease of transition between positions, and then maintaining the correct position at your desk, whether sitting, kneeling, or standing is key. Selecting a standing desk with powerful motors for quick changes is absolutely killer.

The ability to preset positions and change stance at the press of a button will also make you more likely to very position and get the most benefit from your standing desk.

Is Kneeling At A Desk Better Than Standing?

Kneeling vs standing: the jury is well and truly out on this one, with both approaches having their own pluses and minuses. Using a kneeling chair, a form of active sitting, has certain advantages over standing, but then again standing desks also have certain distinct advantages over kneeling chairs.

The truth is, depending on your needs, your body shape, and any injuries or strains you are carrying, either one could be the better option for you. Certainly if you struggle to keep your back straight, need to work on your core muscles, or you find you just don’t get along with ergonomic chairs, a kneeling chair could be a good option for you.

The benefits of standing desks are a little different – although they do of course help with back pain, joint problems and bad posture. Standing desks tend to encourage movement in a more pronounced way, and promote more activity throughout the day. Because of this, they help to boost blood circulation, speed the metabolism, and help burn calories quicker.

Alternating between sitting and standing helps to share the strain, so no one muscle group is overworked. Their are endless standing desk options available too, so even if you have limited space or are on a tight budget, there may well be an option for you. What Does A Kneeling Chair Do?

The concept behind the modern kneeling chair was initially developed by Hans Christian Mengshoel in the 1970’s – but the idea is by no means a new one, with evidence of Buddhists using the style for centuries and echoes in the traditional Japanese seiza sitting style.

Mengshoel built on these ideas to define the concept of ‘balans’ – and then tasked a gang of designers to come up with a kneeling stool. The idea was to open up the hip angle to around 110 degrees, as preferred to the 90-degree angle we are used to when sitting.

This allows the spine to maintain the natural curve it has when we stand upright when we are kneeling, and redistributes the strain across our muscle groups. ​Does A Kneeling Chair Help Relieve Strain On Muscles and Joints?

This, in turn, take strain off of our lower back, neck, and shoulders, and helps strengthen the postural muscles and the core, which support our upper body, neck and head. Users of kneeling chairs report a significant down tick in muscle and joint pain.

Can A Kneeling Chair Help With Breathing?

Taking the strain off of the upper body has another, significant side effect. The arms move freely, and the increased space for the stomach and internal organs, combined with the relative lack of pressure on the diaphragm ensures easier and deeper breathing in this position.

Studies of those who use a kneeling chair have shown clear benefits in the development of postural, back and core muscle groups. The slight lean forward which is encouraged by the kneeling position places the strain equally between the muscle groups, with the emphasis on the core muscles.

This is important as the traditional seated position tends to place the bulk of the strain on the lower back, which is why we see so many lower back problems in the modern office. Well made ergonomic office chairs will provide support to minimise the issue, but only the kneeling position can really address the imbalance of strain.

The most benefit to be had from an active workstyle is in varying our position during the day. Whether that be from sitting to standing to kneeling, or just changing our position slightly but frequently (as the kneeling chair encourages), it’s the variety that keeps our joints and muscles in good shape.

All of this adds up to a more comfortable, energetic approach to work, which, unsurprisingly, has been associated with a distinct uptick in productivity.

Can You Use A Kneeling Chair With A Standing Desk?

There is no reason why you cannot combine a standing desk and a kneeling chair – in fact, this could be a great way of doubling down on the benefits of both. Rather than thinking of ergonomic chairs vs standing desks, they are more useful when thought of as complimentary to each other.

Users who favour standing desks as they tend to strain their lower back probably have the most to gain from this approach, as it really homes in on the core and back muscles which support us.

It might be a good idea to incorporate a standing desk stool as well in this scenario though, just to make sure your legs are given a rest from time to time. Is It Healthy To Kneel At Your Desk?

It depends what you mean by healthy. Using a kneeling chair can do wonders for your core strength, boosting your abdominal and lower back muscles, along with your legs, neck and shoulders. It will also relieve strain on the lower vertebra as it prevents slouching, and as a result can save you from a world of different aches and pains.

If you remain kneeling all day though, even though this is preferable to sitting, you could still see drawbacks. Firstly, your knees and legs may become sore due to the extra strain placed on them. But secondly, and most importantly, kneeling doesn’t have quite the same benefits as standing – so kneeling all day could still lead to weight gain, and any associated health problems.

If you want to incorporate kneeling into your workday, we would recommend a combination of kneeling chair and standing desk. This way you get all the benefits of kneeling chairs and you can alternate between positions, so you’ll be giving your body a light, but balanced workout each day in the office.

If you’re interested in finding a better balance to help preserve your health and wellbeing at work, standing desks are a great place to start your journey. 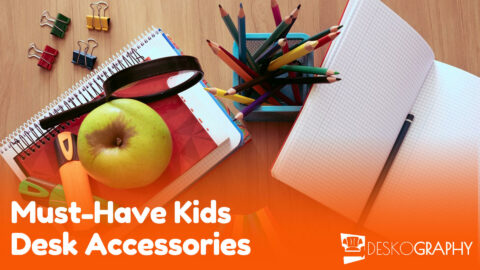 Must-Have Kids Desk AccessoriesWhether you have a new elementary school student or one who's almost ready to graduate from high school, it's never too late to add to their desk supplies. Keep your kids organized and motivated with... 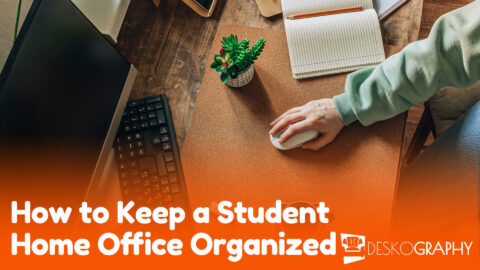 How to Keep a Student Home Office Organized

How to Keep a Student Home Office OrganizedCreating a conducive learning atmosphere for a young student doesn't have to be costly. Typically, all kids need is a little area that's organized and clean so that they can focus while... 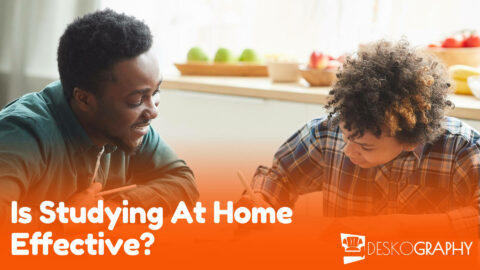 Is Studying at Home Effective?

Is Studying At Home Effective?The effectiveness of studying at home has been widely debated. Some argue that there are benefits to learning from home, like being able to study in your pajamas or having a more flexible schedule.... I’m Tyson and I design furniture. More specifically, I design ergonomic furniture intended to improve the comfort and aesthetics of sit stand desks, ergonomic chairs and accessories.
You may learn more about my story by reading my bio here. Have a productive day!